Inception 2010
A skilled extractor is offered a chance to regain his old life as payment for a task considered to be impossible. 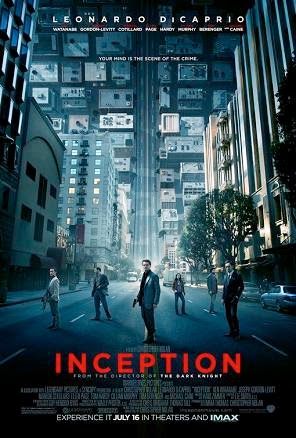 the act of graduating or earning a university degree,usually a master's or doctor's degree, especially atCambridge University.
b.

(in science fiction) the act of instilling an idea into someone's mind by entering his or her dreams.

Christopher Nolan
Nolan's films are rooted in philosophical, sociological and ethical concepts and ideas, exploring human morality, the construction of time, and the malleable nature of memory and personal identity. Experimentation with metafictive elements, temporal shifts, solipsistic perspectives, nonlinear storytelling and the analogous relationship between the visual language and narrative elements, permeate his entire body of work. Described as "one of the most innovative storytellers and image makers at work in movies today".

"I'm fascinated by our subjective perception of reality, that we are all stuck in a very singular point of view, a singular perspective on what we all agree to be an objective reality, and movies are one of the ways in which we try to see things from the same point of view".

His characters are often emotionally disturbed and morally ambiguous, facing the fears and anxieties ofloneliness, guilt, jealousy, and greed; in addition to the larger themes of corruption and conspiracy. By grounding "everyday neurosis – our everyday sort of fears and hopes for ourselves" in a heightened reality, Nolan makes them more accessible to a universal audience.

In Inception, Nolan was inspired by lucid dreaming and dream incubation. The film's characters try to embed an idea in a person's mind without their knowledge, similar to Freud's theories that the unconscious influences one's behavior without their knowledge. Most of the film takes place in interconnected dream worlds; this creates a framework where actions in the real (or dream) worlds ripple across others. The dream is always in a state of emergence, shifting across levels as the characters navigate it.

Shortly after finishing Insomnia (2002), Nolan wrote an 80-page treatment about "dream stealers" envisioning a horror film inspired by lucid dreaming and presented the idea to Warner Bros. Feeling he needed to have more experience with large-scale film production, Nolan retired the project and instead worked on Batman Begins(2005), The Prestige (2006), and The Dark Knight (2008). He spent six months revising the script before Warner Bros. purchased it in February 2009. Inception was filmed in six countries and four continents, beginning in Tokyo on June 19, 2009, and finishing in Canada on November 22, 2009. Its official budget was US $160 million; a cost which was split between Warner Bros and Legendary Pictures. Nolan's reputation and success with The Dark Knight helped secure the film's $100 million in advertising expenditure, with most of the publicity involving viral marketing.

Cast and their Characters


Dom Cobb is a skilled thief, the absolute best in the dangerous art of extraction, stealing valuable secrets from deep within the subconscious during the dream state, when the mind is at its most vulnerable. Cobb's rare ability has made him a coveted player in this treacherous new world of corporate espionage, but it has also made him an international fugitive and cost him everything he has ever loved. Now Cobb is being offered a chance at redemption. One last job could give him his life back but only if he can accomplish the impossible-inception. Instead of the perfect heist, Cobb and his team of specialists have to pull off the reverse: their task is not to steal an idea but to plant one. If they succeed, it could be the perfect crime. But no amount of careful planning or expertise can prepare the team for the dangerous enemy that seems to predict their every move. An enemy that only Cobb could have seen coming.

Synopsis : http://www.imdb.com/title/tt1375666/synopsis?ref_=ttpl_pl_syn
A young man, exhausted and delirious, washes up on a beach, looking up momentarily to see two young children (Claire Geare and Magnus Nolan) playing in the sand before he passes out. An armed guard (Tohoru Masamune) discovers him and has him brought to a large, seaside palace where the proprietor, an elderly Japanese man, is told of the stranger's arrival. The only objects found on him were a handgun and a brass top. The old man allows the stranger entry. He is dragged in and given some food which he struggles to eat as the old man picks up the brass top and says, "You remind me of someone...a man I met in a half remembered dream. He was possessed of some radical notions." The stranger looks up in realization as the scene shifts...

Dreams and Reality
In Inception, Nolan wanted to explore "the idea of people sharing a dream space...That gives you the ability to access somebody's unconscious mind. What would that be used and abused for?" The majority of the film's plot takes place in these interconnected dream worlds. This structure creates a framework where actions in the real or dream worlds ripple across others. The dream is always in a state of production, and shifts across the levels as the characters navigate it.

Penrose stairs are incorporated into the film as an example of the impossible objects that can be created in lucid dream worlds. 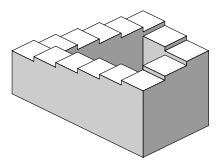 Nolan himself said, "I tried to work that idea of manipulation and management of a conscious dream being a skill that these people have. Really the script is based on those common, very basic experiences and concepts, and where can those take you? And the only outlandish idea that the film presents, really, is the existence of a technology that allows you to enter and share the same dream as someone else." 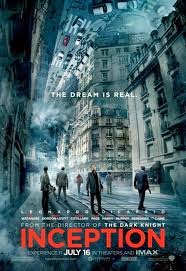 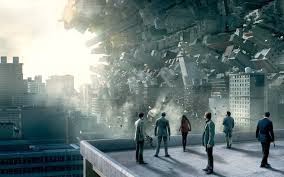 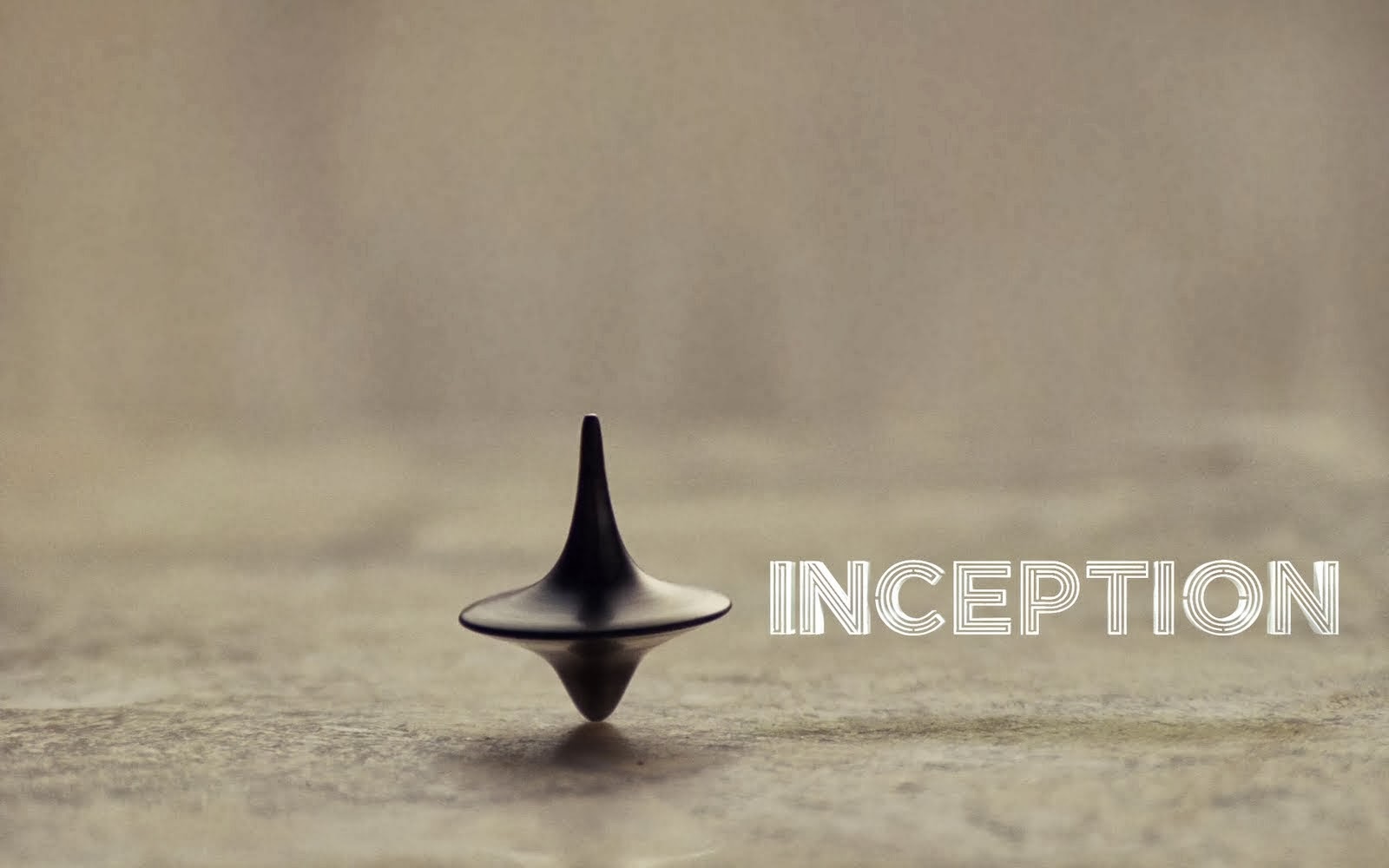 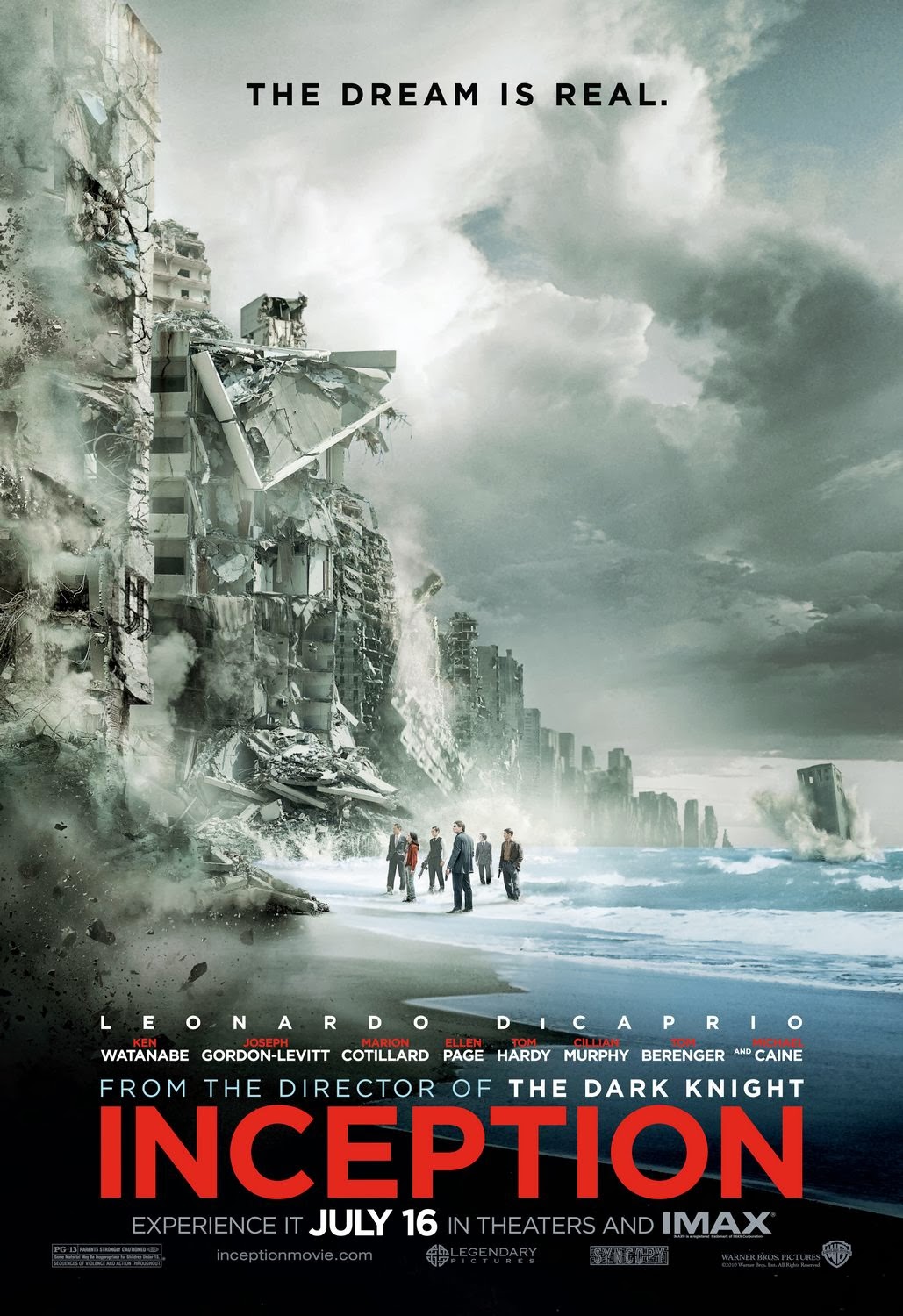 I like the way the levels of the final dream have been visualised as it is quite confusing, I also like the icons used for the characters, and the involvement of the characters within the levels. 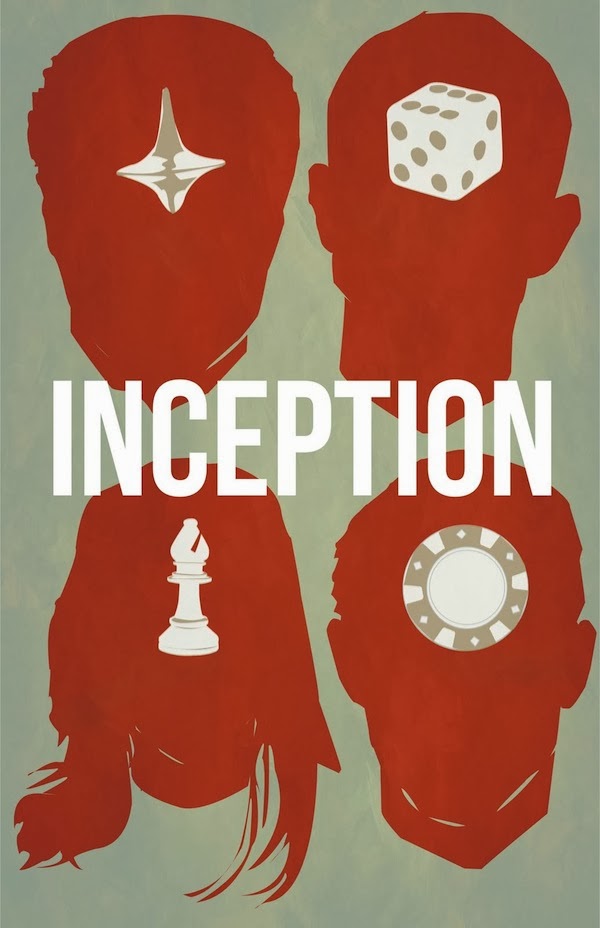 Visualisation of the totem's and which character they are related to.

A Totem is an object that is used to test if oneself is in one's own reality (dream or non-dream) and not in another person's dream. A totem has a specially modified weight, balance, or feel in the real world but in a dream of someone who does not know it well, the characteristics of the totem will very likely be off. Any ordinary object which has been in some way modified to affect its balance, weight, or feel will work as a totem.


This is the single most important item in the movie.
It is a common misconception that the totem is used by the owner to figure out if he’s dreaming or not. That is not entirely accurate.
This is what the totem does: the owner uses their unique totem to find out if they’re in someone else’s dream or not.
It does not necessarily mean that they’re dreaming themselves.
The sole purpose of the totem is to avoid being trapped in someone else’s dream. This is why it’s important never to reveal the totem and how it works to anyone else. Only the owner is supposed to know exactly how the totem will function in reality and how it might react differently in a dream.
Arthur’s totem is the loaded die. Only he knows exactly how the die works. Even though he told Ariadne what his totem was, he never revealed to her how it works. In this case, if he suspects he’s in someone else’s dream he could roll the die and the result will prove to him whether or not he’s in reality.
Ariadne’s totem is a bishop that is hollowed out. It’s never explained in the film how her totem works.
The main totem in the film is Dom Cobb’s.

I like the pop-up nature of this piece and the adaptation of the city skyline which is prominent within the film.

The colour red is very strong in this and the lines relate to the machine that is used within the film to endure dreams. The silhouette is of the main character Cobb - (Leonardo DiCaprio) at the start of the film he is on a chair and falls back into the bath to awake himself.


Again another another attempt at trying to explain the levels of the dreams in the film, also involving the characters, a good way to show / explain the film by making it visual. 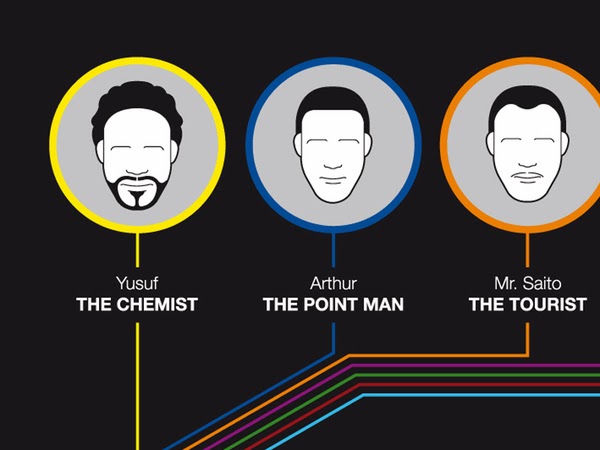 The use of the faces of the characters to represent the levels is interesting. Again the skyscrapers are present. And the saying 'your mind is the scene of the crime' 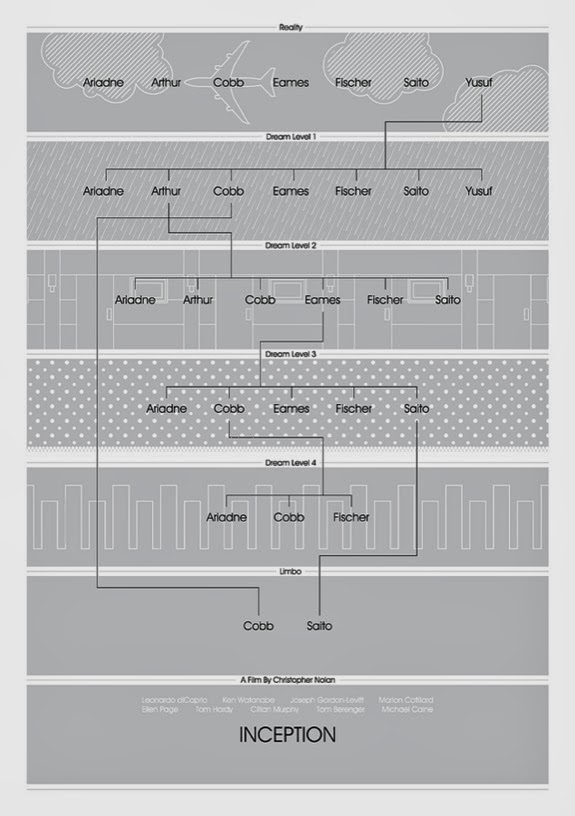 This piece again is representing the levels of the final dream. I think that this is easier to follow than the previous, you have to be carful when using 3D elements in describing- visually the levels of the dream.


I then watched the film, I had watched it before and so I knew quite a bit about the film. And this also meant I could really watch it from another perspective after doing all the research swell, I felt like I would be able to pick up on more things. I took notes on the film whilst watching. 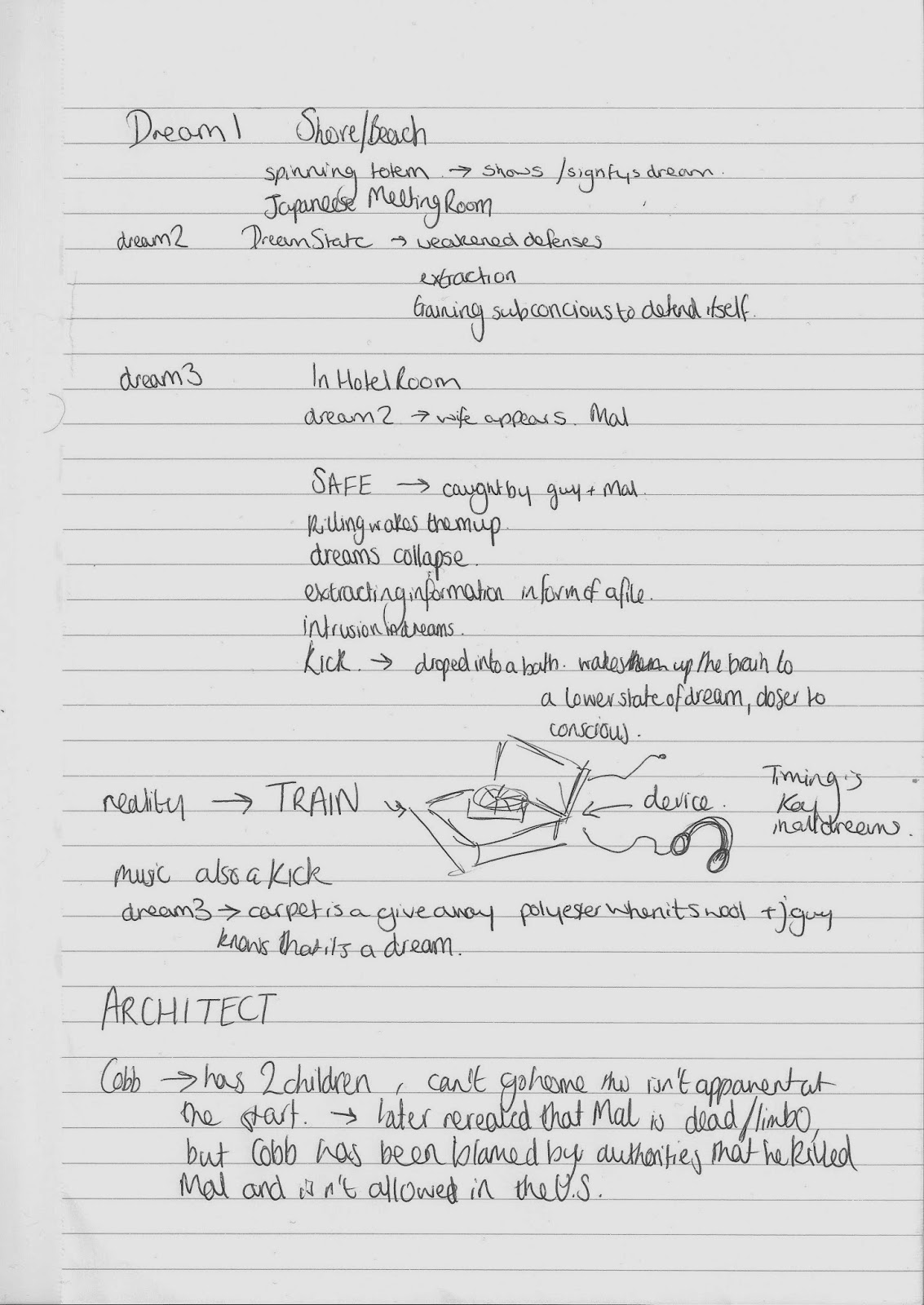 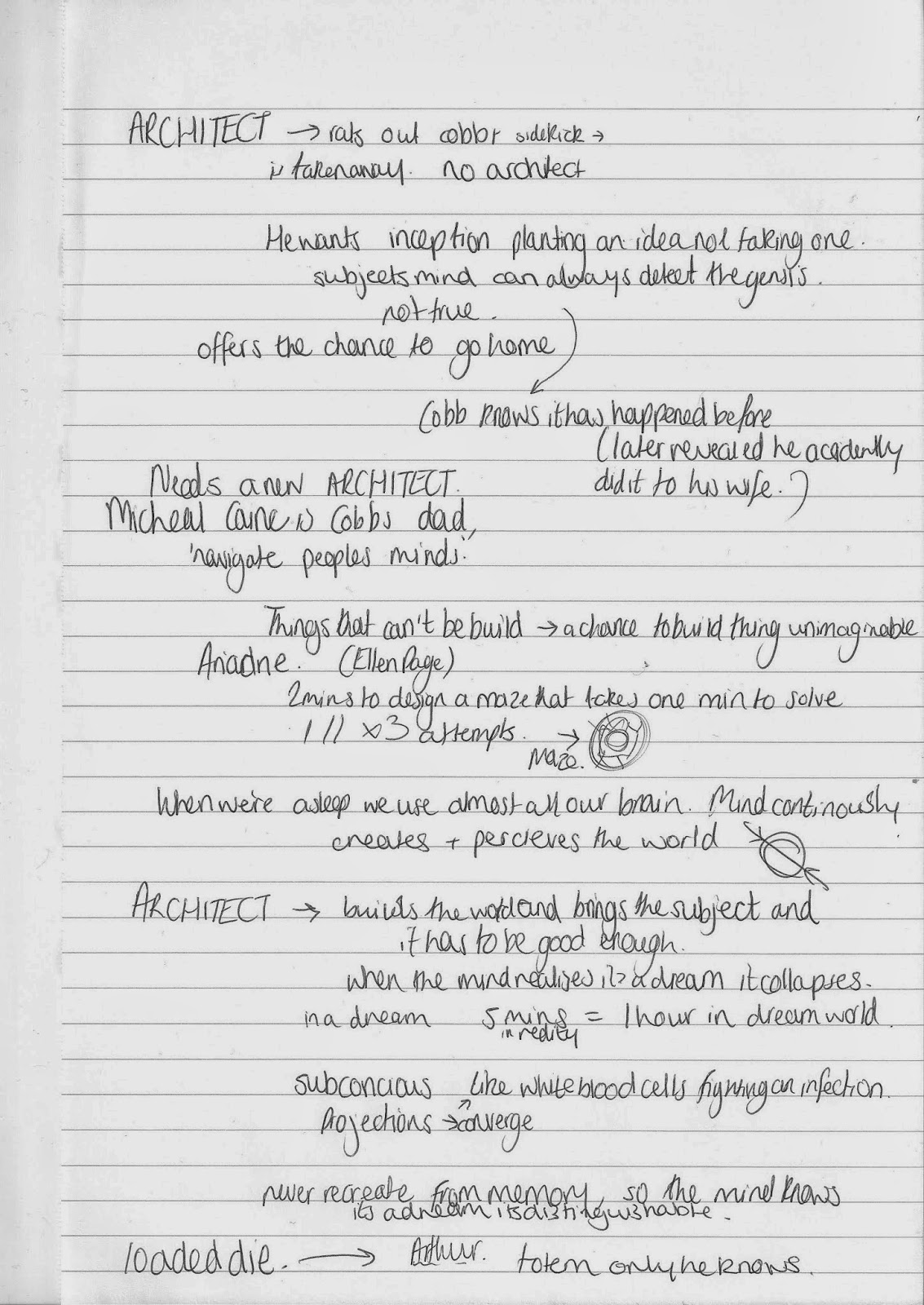 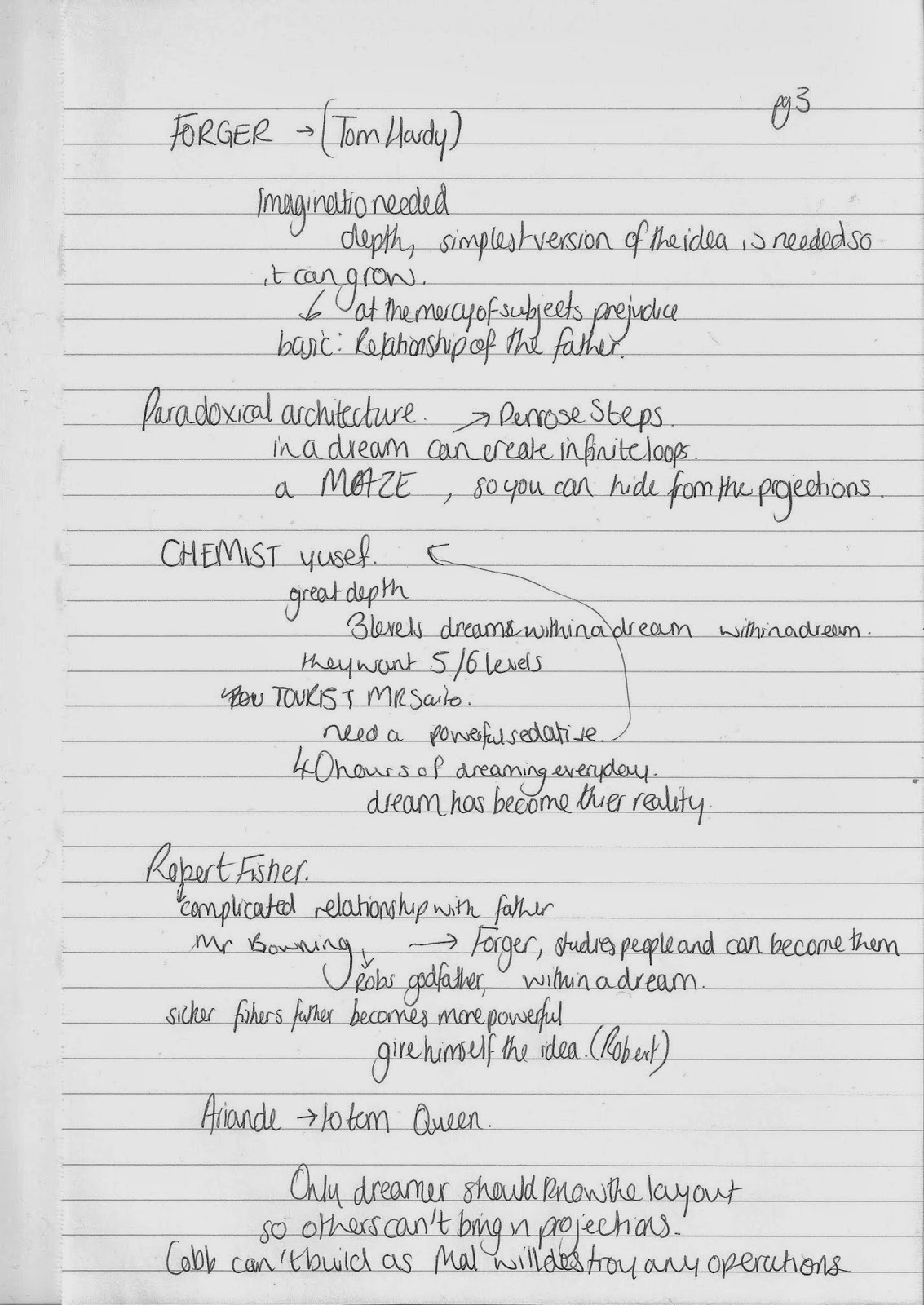 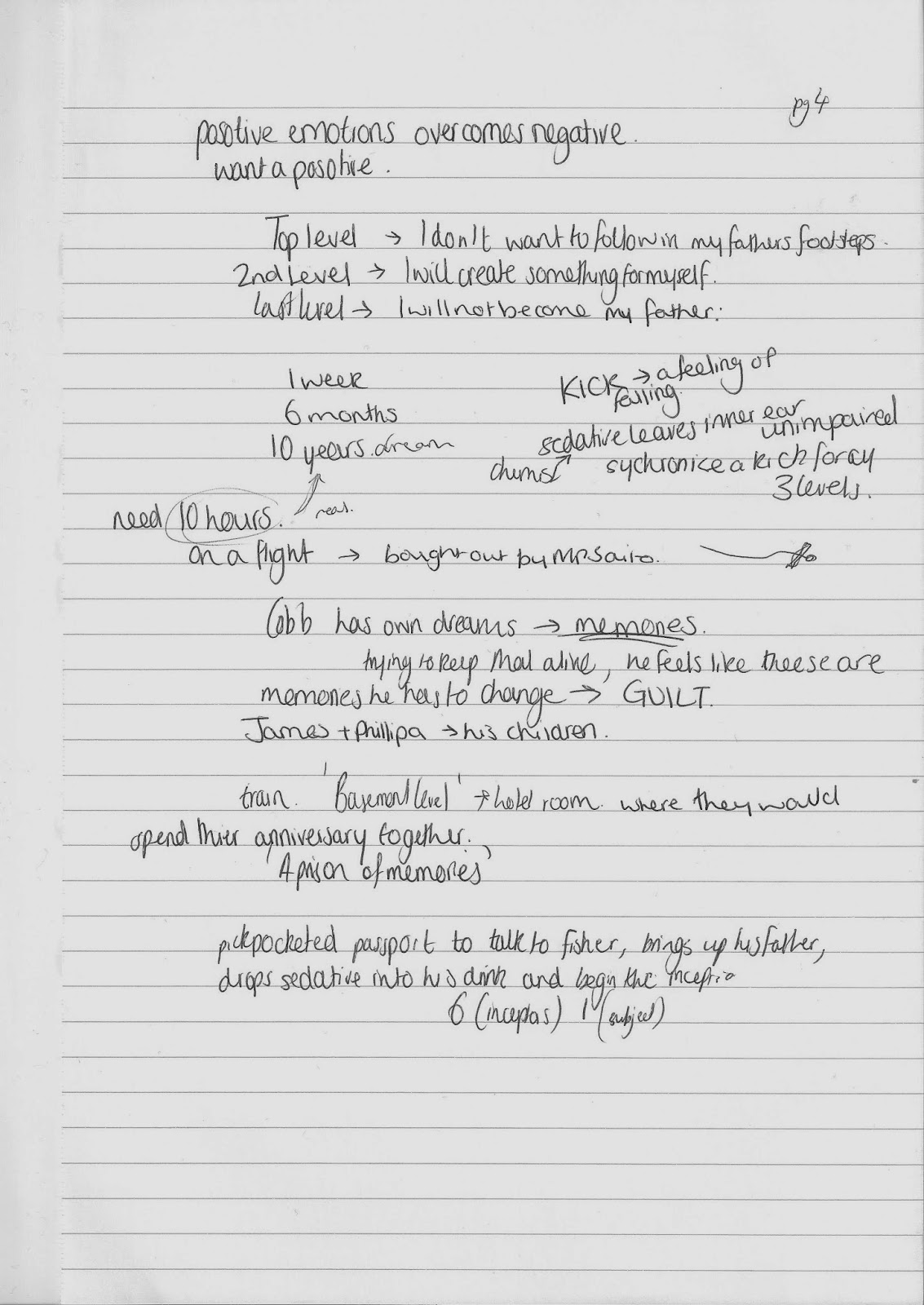 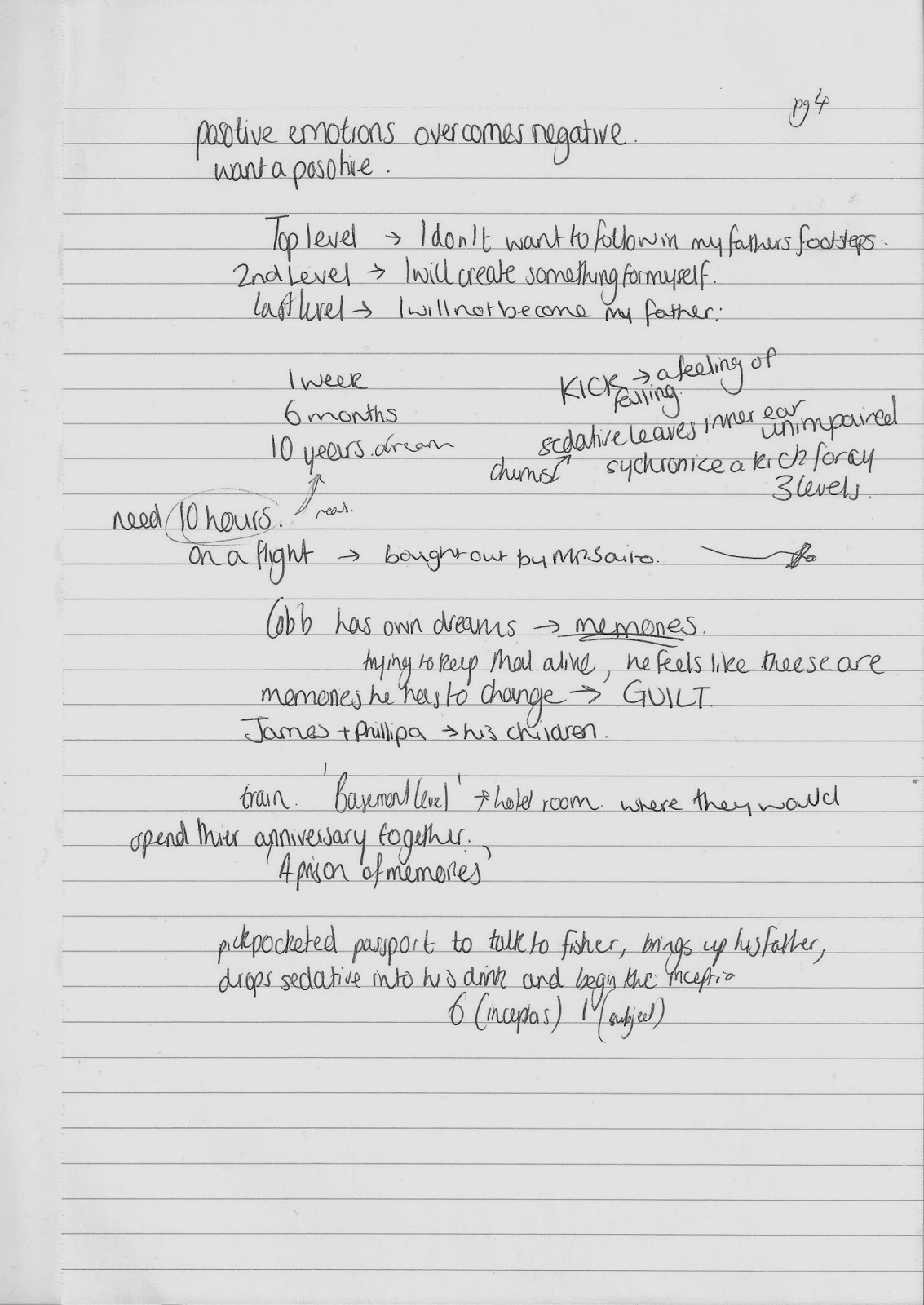 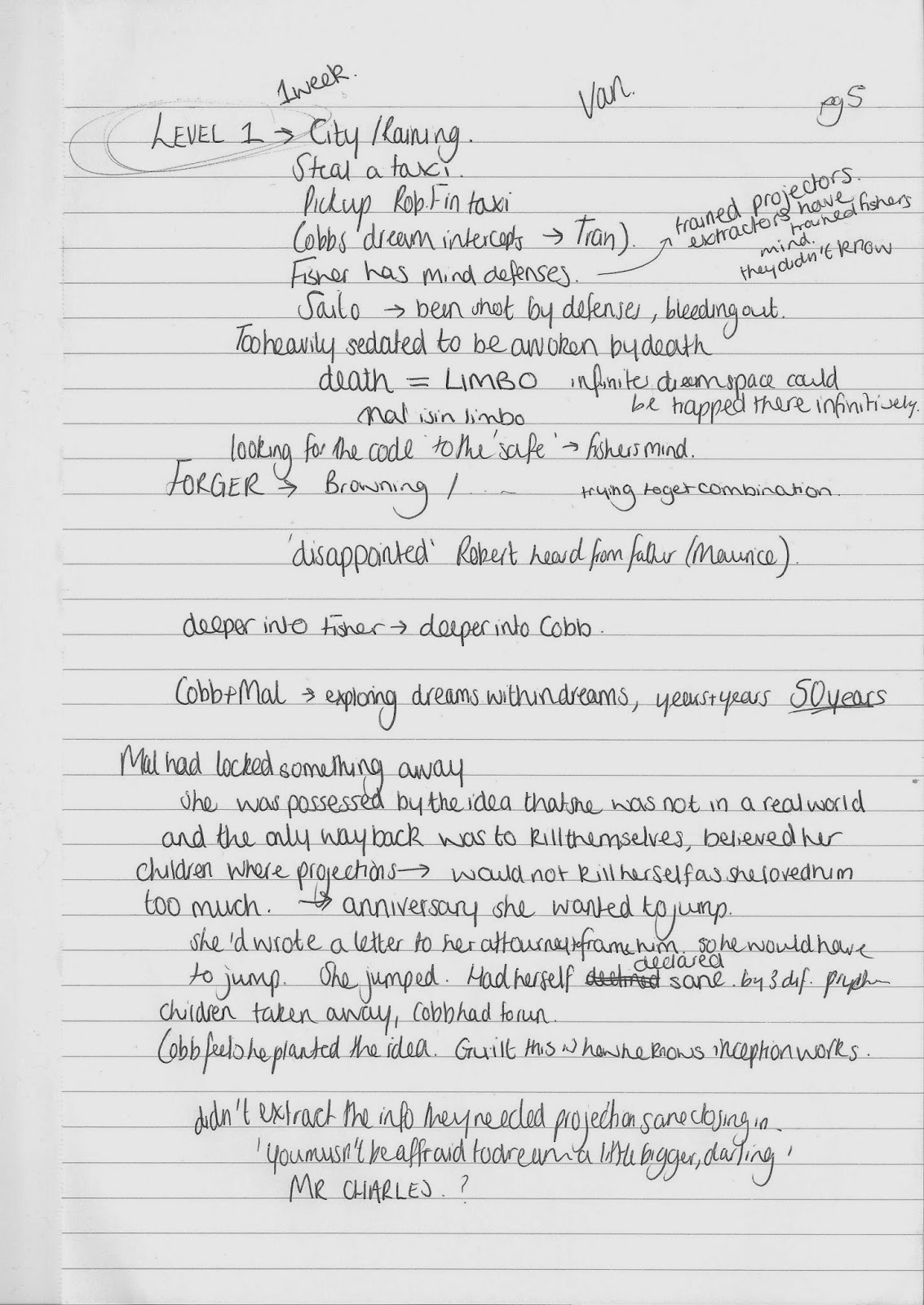 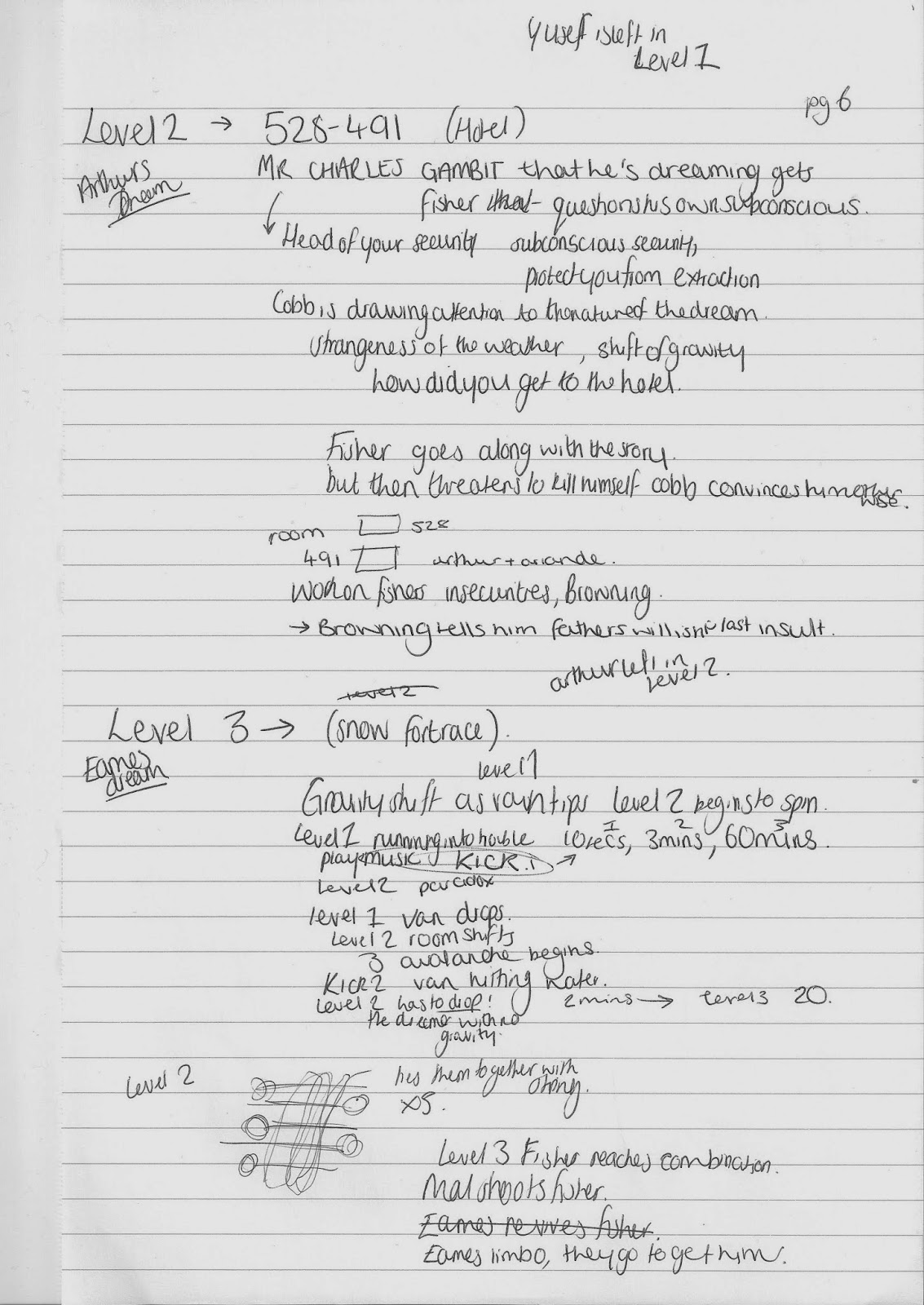 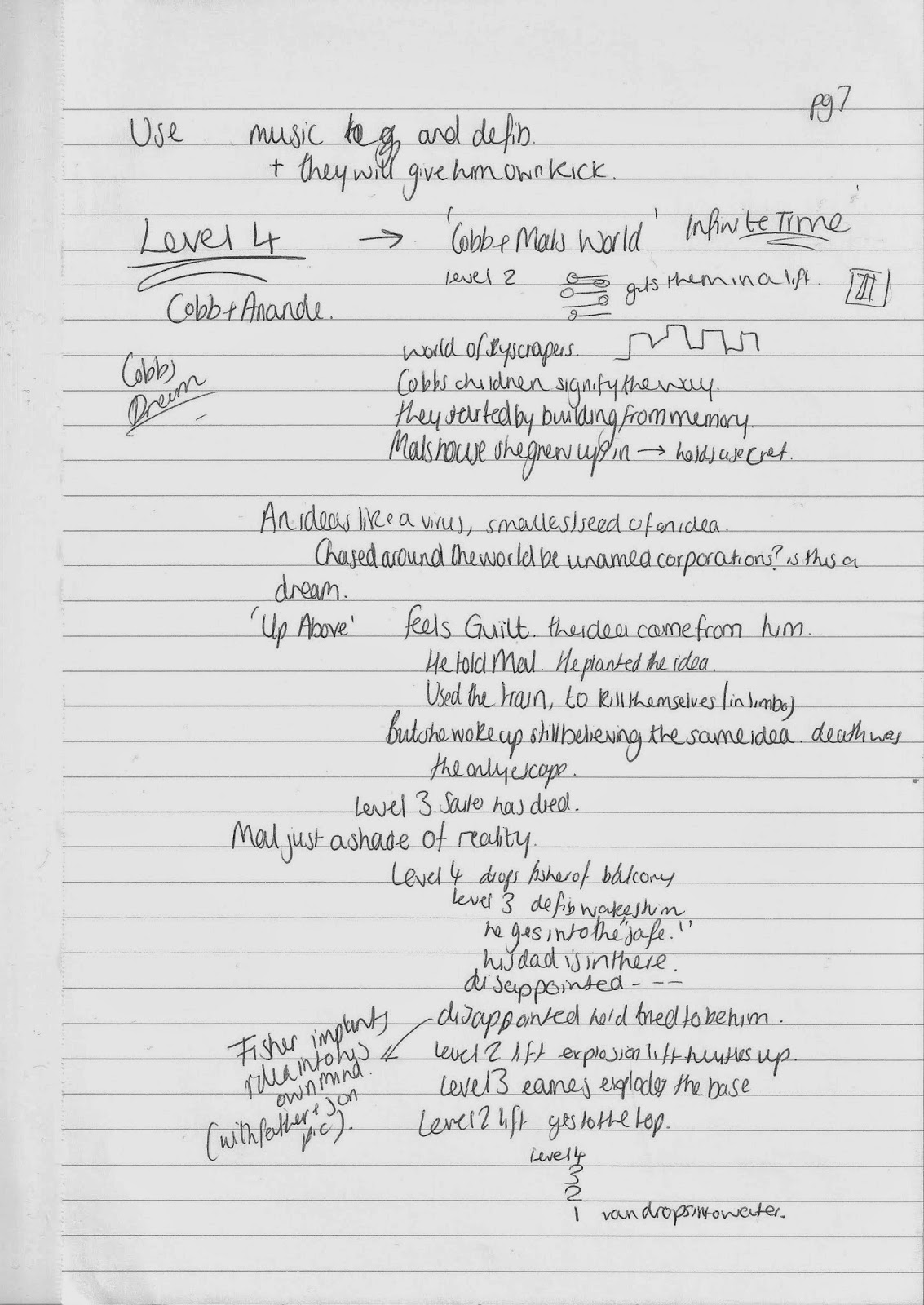 I found that I learnt more and understood more about the film and interpreted it differently, I also sketched some of the elements in the film so I knew what I had written.